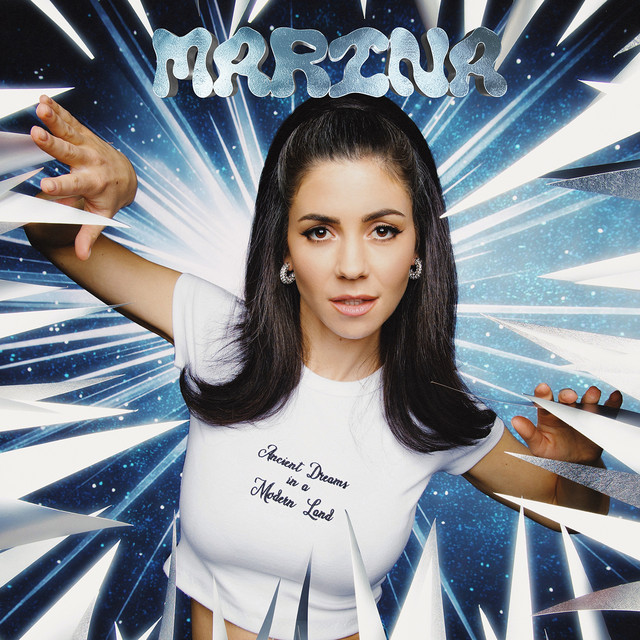 Ancient Dreams in a Modern Land, the latest album from 35-year-old singer-songwriter MARINA, did not change my life, but it certainly changed my perspective. Released on June 11, 2021, the album is hungry for social justice, and tackles topics like sexism, capitalism, imperialism, toxic romance, pollution, self-love, and much more.

Marina Diamandis began her career with very little experience. Growing up in Wales, the singer couldn’t afford singing lessons outside the school choir, but her inherent love for music carried her from home to Greece and, eventually, to London. For months, Marina obsessed over auditions. She applied to every advertisement that fell in her mailbox, but to no avail. Eventually, inspired by the phenomenon that is social media, Marina developed her original stage name, “Marina and the Diamonds,” and produced her own album on Myspace.

Marina and the Diamonds released four studio albums before changing her name. Electra Heart, her most popular record at one time, was the main cause for this transformation. Marina hated who she had become, a pop artist with little more to talk about than heartbreak and fame. At the time, her producers had pressured her to work with artists and songwriters outside of her comfort zone. Marina sang the songs others wrote for her—words and lessons that were not totally genuine—and years later questioned her choices. “I felt kind of ashamed,” Marina told the New York Times. “Like this isn’t really who I am.”

Eventually, Marina and the Diamonds stepped into the grave and reemerged as simply MARINA. The artist debuted her new identity in 2019 through the album, Love + Fear, which, although powerful, does not hold the same energy as Ancient Dreams in a Modern Land. Her latest collection is unapologetic and eager. From the first chord of the first song, the audience understands that Marina has a message. She is here, not as a character or a facade, but as herself. Through her ten songs, Marina makes comments on government, money, and the social damnation of artists like Britney Spears, but above all, this album is a pledge to women. Marina’s music is “tied to a degrading of the feminine” and why “the way we treat people is linked to our connection to the planet.”

In my opinion, Marina is an advocate for humanity. Beneath her criticism, she reveres human nature and asserts that the future is hopeful, so long as we remember who we are. Whether you are male, female, or non-binary, I urge you to give this album a listen. If you’re still unsure, I have provided a list of the album’s songs, alongside a few powerful quotes that I believe will be quite persuasive.

Ancient Dreams in a Modern Land:
“We're now living in a seminal age
The walls are being broken and we're ready for change.”
Venus Fly Trap:
“They'll shame you, blame you, pretend to even hate you
Take away your rights, pacify you with their lies
Whatever you give life, you are gonna get back.”
Man’s World:
“If you have a mother, daughter or a friend
Maybe it is time, time you comprehend
The world that you live in, ain't the same one as them
So don't punish me for not being a man.”
Purge the Poison:
“Need to purge the poison, show us our humanity
All the bad and good, racism and misogyny
Nothing's hidden anymore.”
Highly Emotional People:
“People say men don't cry
It's so much easier to just lie
'Til somebody takes their life
Emotions are a part of our design.”
New America:
“I know that you had big dreams
That you had big plans
But abuse won't make
Won't make a free land.”
Pandora’s Box:
“I kept my hope alive
But I don't wanna be the bearer
Of pain just so we can survive.”
I Love You But I Love Me More:
“You only care about me when it suits you
Women love too early, and men love too late
And now your promises, they just suffocate.”
Flowers:
“I think it made me stronger
But I would rather not
Betray myself, just to keep your love at any cost.”
Goodbye:
“No matter what happens now
Nobody can take our love down
It's safe inside our memories
And I won't forget how you healed me
Goodbye.”