6 Ways Rape Culture is Prevalent in Our Society Rape culture is everywhere, and those that can’t see it are one of two things: uneducated or turning a blind eye to it. It’s in our music, our movies, our day-to-day lives. It’s in the interactions we have, we hear, and we see. It was taught to us since we were young, even by the people we trust. To break rape culture down means that we, as a society, must first educate ourselves, recognize it, and call it out. The following is a list of ways that rape culture persists in the real world:

RAPE CULTURE IN THE CRIMINAL-LEGAL SYSTEM

Let’s start with the obvious. People are not getting sentenced for rape. Less than .01% of rapists will be put into prison.

Perhaps the quintessential example: Brock Turner. Rape culture is how we talk about him: which college he went to, what his grades were, how his actions cost him his career - everything but the fact that he is a criminal. Rape culture is his request for a retrial in December of 2017. 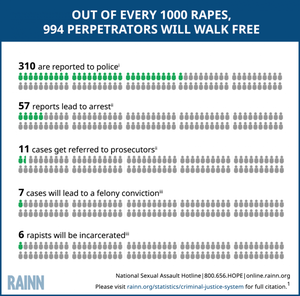 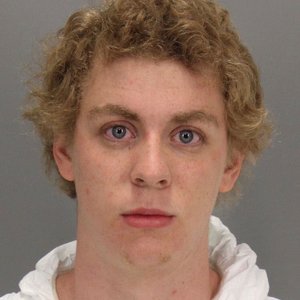 RAPE CULTURE IN THE MUSIC INDUSTRY

One notorious pop song called out for its promotion of rape culture is none other than Robin Thicke’s “Blurred Lines.” He chants in the song that, because she’s a “good girl” she must want to have sex with him. The title alone is rape culture, as “blurred lines” are not a consensual, enthusiastic yes from the other partner.

Ke$ha’s fight against Dr. Luke is also another example of how rape culture can manifest in the music industry. In a lawsuit in 2014, Ke$ha reported that she was “sexually, physically, verbally, and emotionally abused to the point where [Ke$ha] nearly lost her life.” Later in 2014, Dr. Luke countersued, claiming that her accusations were false.

RAPE CULTURE BEHIND THE SCENES IN HOLLYWOOD

When talking about rape culture behind the scenes, Harvey Weinstein might be a name that comes to mind. October of 2017 hit hard with survivors stepping forward to share their stories from working with Weinstein; Rose McGowan, Cara Delevingne, and Ashley Judd were among those who came forward with allegations of sexual abuse. By November, multiple companies who had been working with Harvey Weinstein cut ties. While there was a large outcry from stars in Hollywood, rape culture lies within the fact that it took years for people to step out, as some stories of abuse dated back to the 1980s.

One movie scene that stands out as a perfect example is in the movie Twilight. Edward commands Bella to “stay very still” during their first kiss. Edward never asked her if she wanted to kiss, and yet, this scene is viewed as romantic to this day. Although this is not explicitly an example of rape, it teaches its viewers—primarily young girls—that their boundaries and desires are irrelevant.

RAPE CULTURE IN THE WAY WE RAISE CHILDREN

Rape jokes are another way rape culture manifests in day to day life. Everyone has heard that one kid saying, after failing a test, “that test just raped me!” While acknowledging that the test was hard, that one kid also is implying that the experiences of sexual assault can be compared to failing a test, which is far from the truth. We know that rape is not a joke, so it should not be made into one. Rape is a serious matter that can have devastating effects on survivors, and their experiences should not be trivialized.

From a very young age, we teach women to cover their bodies by wearing modest clothing. Some are told to keep their hair down at night, to prevent it being easier to be pulled in a ponytail. Dress codes tell girls their shorts and skirts cannot be above a certain length, and punish them if they don’t follow the rules. Some women are given pepper spray to carry wherever they go, as for a method of protection.

We teach girls that we need to prevent ourselves from getting raped, but we do not teach people not to rape. Women who wear modest clothing or carry pepper spray can be and are still sexually assaulted. No method of “prevention” can stop all rape, and it is never the victim’s fault in any sexual assault.

RAPE CULTURE IN THE WAY WE TALK TO ONE ANOTHER

When someone is assaulted, rape culture can manifest in the questions we ask. “What were you wearing?” “Were you drinking?” These questions embody rape culture because they don’t focus on who is at fault: the rapist. These questions focus on the survivor and what they were doing; similarly to the way we raise children, this places the responsibility of avoiding rape on the victim and not the perpetrator. When talking about rape, society switches the term “rape” and “sex” all too often. Let’s get one this straight: sex is consensual, rape is not. Sex and rape are not the same thing.

Rape jokes are another way rape culture manifests in day to day life. Everyone has heard that one kid saying, after failing a test, “that test just rapedme!” While acknowledging that the test was hard, that one kid also is implying that the experiences of sexual assault can be compared to failing a test, which is far from the truth. We know that rape is not a joke, so it should not be made into one. Rape is a serious matter that can have devastating effects on survivors, and their experiences should not be trivialized.

We might think that all of these types of rape culture are different, but in reality, they are not. From jokes about rape, to Hollywood executives’ abuse of their employees, these forms of rape culture cause harm and contribute to creating ideas that are detrimental to how society responds to sexual assault and to survivors. Without becoming educated in rape culture, we are only allowing it to be more deeply ingrained in society.

IT’S NOT AN EASY TASK TO COMBAT RAPE CULTURE, BUT WORKING TOGETHER AS A SOCIETY, WE CAN RISE UP AND DO IT.